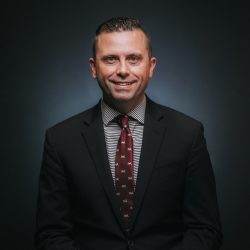 Michael Thomas joined the UPCI Youth Ministries team in January of 2018. Before joining the team, Michael lived in Gadsden, Alabama where he served on staff at Church on the Rock as assistant pastor and youth pastor. Michael has been involved in youth ministry on the local and district level for over 16 years. His youth ministry experience includes serving as youth pastor, sectional director, district youth secretary as well as youth president for Alabama. Michael is privileged to be an ordained minister of the UPCI and is excited to serve this incredible generation of apostolic youth and young adults.

Michael met his beautiful wife at a youth camp and after many years of pursuit, convinced her to marry him. Michael and DeAnna have been married for 15 years now and are parents to a blue-eyed ray of sunshine named Myla Joy. Recently, in 2020, the Thomas family grew by four feet with the addition of Jayla Hope and Judah Michael.
Michael attended Gateway College of Evangelism and continues his educational pursuits through Hope International University. Michael enjoys running, kayaking, golfing and going on adventures.

Be notified of the latest resources & news from UPCI Youth Ministries